Craft breweries are all over the place, in a good way, and the greater Daytona Beach area is no exception. 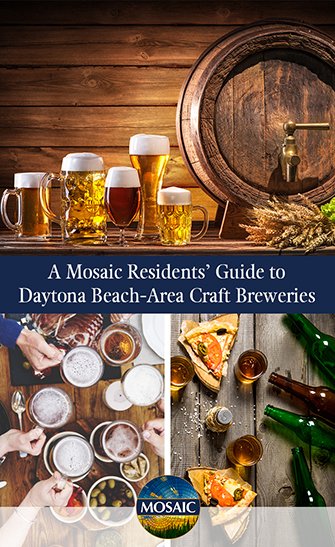 At recent count, approximately 20 craft breweries — two distilleries among them — called the Daytona Beach area home. Talented brewers are at work here, and some venues are as known for their food as they are for their brews.

And while we know you love your new custom Florida home at Mosaic and its well-designed kitchen, sometimes culinary adventure calls. Use this handy guide to navigate the Daytona Beach Ale Trail.

Some of the breweries on our list are popular enough that they spread to other nearby cities! Wherever you go in Daytona Beach and the surrounding areas, you’ll find a sweet spot for craft brews. You’ll find the Half Wall Beer House in New Smyrna Beach, DeLand and Port Orange. And, the Tomoka Brewery in Ormond Beach has another location, the Tomoka Brewing Company, in Port Orange. Both are close to your new Mosaic home.

The Rock Bottom Restaurant & Brewery is located at the One Daytona complex on International Speedway Boulevard and is the only national chain on our list! It’s worth a visit, and you’ll find plenty of other fun to be had at One Daytona while you’re there.

The Daytona Beach Brewing Company is located in an office park/industrial area on Fentress Boulevard. Don’t let the location fool you, even food trucks make stops there.

The Copper Bottom Craft Distillery and Red Pig Brewery are neighbors at The Market shopping center in Holly Hill.

Let someone else do the work

Remember that if you organize Mosaic friends and neighbors for a craft-brewery adventure, someone should serve as a designated driver. Also, pace yourself. Sip thoughtfully and enjoy food from the breweries who serve it.

Need we suggest that trying to visit all 20 Daytona Beach-area craft breweries in one day or night probably isn’t smart? Hint: it’s not. Pick a few locations, sample those establishments’ offerings, then schedule another ale-trail excursion at a later date.

If all else fails, hire it out. Florida Brew Tours specializes in craft-brewery tours in the central part of the state. Let them do the driving while you and your group do the sipping and nibbling.

Ready for your Mosaic lifestyle? Talk to us here.